Can You Spot The Defect?

Although statistics confirm around 90% of all defects are detected during the physical and visual inspection, the electrical testing phase of testing and tagging remains very important. 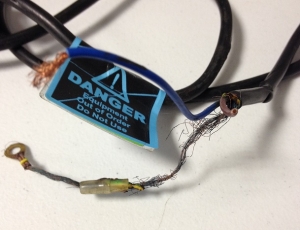 By performing the correct electrical tests on an appliance you can uncover defects that can’t be seen during the initial inspection stage.

This is the supply lead from a bench grinder that was in active service, used most days and had been used several times on the day of my visit.

The earth conductor had been severely compromised several days earlier due to the client attaching the earth lead of their 15A welder to the metal framed portable work-bench on which the bench grinder was secured and plugged into an outlet (power point). The high currents that flowed through the earth circuit of the bench grinder were far greater than it was designed to handle and most of the conductors had melted.

This defect could not been seen during the inspection stage because nearly all of the damage was inside the bench grinder.

A 200mA earth continuity test produced a reading of >35 Ω which is well above the threshold of 1 Ω and resulted in the appliance being withdrawn from service immediately.

The client was unaware of the defect or the significant hazard they were exposed to because when the bench grinder was used, it functioned as normal. Had the bench grinder developed an electrical fault that resulted in chassis becoming live it is most likely the protective earth would have failed and the risk of injury or death from electric shock to the user would have been in the very high range.

It is worth noting that due to the way Class 1 appliances are designed, it is not uncommon for them to function normally even if the protective earth connection has been compromised. This is another reason why regular testing and tagging of electrical appliances is an important aspect of any workplace safety program.

Learn how to correctly identify, inspect and electrically test Class I and Class II appliances by attending one of our test and tag courses.

About the Author: John Blackburn

John is recognised as an expert in the test and tag industry due to his extensive and broad experience that began in 2004 when he was responsible for equipment maintenance at his local SES unit. More Info: https://www.tatsa.com.au/john-blackburn/

Easy to understand and a quick response time to questions... view more

Thanks for the great feed back.

by Dino on Test Tag Course

Thanks Dino, glad you enjoyed it.